water is holy to life 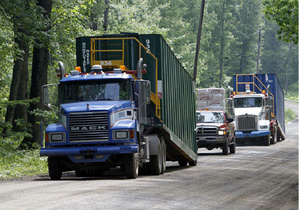 Over the next thirty years, given the present technology, 500 billion gallons of water will be retired underground in Pennsylvania through the process known as horizontal fracturing.  This is according to email discussions I have had with Penn State’s Marcellus Center for Outreach and Research

500B is equivalent to 68 Harvey’s Lakes, or 263 Huntsville reservoirs, or 200 Wallenpaupacks (a relatively shallower but more expansive body of water).

This water will no longer be available for human use.  It will lurk in the shattered caverns below.   This dispersed sea will be waiting for a flaw, a break, an errant burst of pressure…

In a recent email from the Marcellus Shale Coalition titled, In the Know on H20, the industry relates:

Well, consider this: All told, the Susquehanna and its surrounding watershed convey more than 26 billion gallons of water through the Commonwealth every single day.

I will post the calculations and assumptions and caveats under separate cover.

The 500B could go lower, it could go higher.  But I suspect 5ooB is on the low side.

The 500B is Pennsylvania only! What about the amount of water being retired throughout the United States, Canada, South America, Australia, Africa, Asia, and Europe?  How many tens of trillions?

Add to this, the global warming trend – and it will be unintentional suicide by corporate paradigm.

There will be a public meeting,  “Faces of Dimock “, held at the Kingston Township Municipal Building, 180 E. Center Street, Shavertown. It starts at 7pm on Friday, October 15th. The guest speaker will be Craig Sautner, who has been seen at many events with his gallon jug of “Dimock Lemonade”, drawn from his contaminated well. He will talk about the events of the last two years, and their effects on his family. Those who attend will see and hear what it is like to live next to a “frack farm”, from a video interview taken at Ron and Jean Carter’s home. Parking is available at the rear of the building, and across the street at the athletic field.

Gas Stock I – the trek

It was a day well spent.  A day in the sun among old and new friends.  Gas Stock was a gathering which spanned generations, politics, communities, and states.  It was a  campfire around which we joined as one.  Thank  you to NEPA Citizens in Action!

I was part of a small group which hiked from the Susquehanna in Wilkes-Barre to the Fair Grounds in Lehman.  Here is what the Times Leader reported about our trek:

Don Williams, of Montgomery County, set out from Wilkes-Barre’s Nesbitt Park at 6:30 a.m. and walked more than 10 miles to the fairgrounds together with his daughters, Lisa and Lauren Williams, and two local bloggers, Mark Cour and Herb Baldwin.“I’ve attended several of these meetings where the gas industry people basically said, if you drove here and you don’t support what we’re doing, you’re a hypocrite. I remembered that,” Williams said. “That’s why I did it, being able to say I had the lowest carbon footprint here today.”

Actually there was six of us. The person omitted in the Times Leader quote is blogger Hannah Abelbeck.  Sending us off was yet another blogger, John, and his sister Sandy. They showed up at dawn to wish us well and record the riverside ceremony. Afterward, we started out, four bloggers and two sane people.

(“By the time we got to Gas Stock, we were half a dozen strong…”) (apologies to Joni Mitchell).

Our march paralleled in reverse the route of  Toby’s Creek as it moves from the back mountains down to the valley, tumbling fresh water into the Susquehanna and eventually the Chesapeake.

We started our journey atop concrete and asphalt, alongside traffic and amid big plastic signs and display windows. We left the streets in Luzerne and strode along an old railroad bed turned recreational trail. It parallels the highway which was once but a creek side foot path. Now the sound of  traffic permeates the air.

We eventually emerged from the woods onto route 309 in Dallas. It was pedestrian unfriendly from there to the fairground. We stopped by Lisa Baker’s office but no one was there. We took some pictures and left tri-folds of information in the doorjamb. Lisa continues to believe this corporate invasion can be “managed”.

The picture above is one taken at Baker’s office.  You will notice the Pennsylvania State Flag is upside down. This was not a mistake. Don did it, as a sign of distress.  Penn’s Woods is in serious jeopardy.

( There is, however, one mistake in the photo: See if you can find it in less than five seconds.)

Meanwhile, to be continued…

Even if one manages the drilling like an angel, and has the luck of God… even if, there are inspectors hanging from every rig… and ten feet of regulations at each worker’s side, even if… even if…

It will not change the inexorable facts that with each fracking: we retire millions of gallons of drinking water from the earth’s scarce supply, and we saturate the air with pollutants.  Also, we horizontally fracture miles of rock  below us, and fill those sharded caverns with a toxic slurry of brine, radioactivity, and nasty chemicals.  That is the present state of reality.  Even if we don’t want to believe it.

Thank you, we will carry on…

here is your “American” energy independence

Europe’s largest oil company said it will pay cash for East Resources, a Pennsylvania company that owns more than 2,500 oil and natural gas wells in the United States. It also controls 1.25 million acres of land, mostly in the energy-rich Marcellus Shale region that runs from New York to southwest Virginia.

Shell CEO Peter Voser said the acquisition fit with plans to “grow and upgrade” its holdings of shale gas in North America.

International energy companies have aggressively sought a bigger foothold in the U.S. oil shale industry, even with natural gas prices slumping to less than half of what they were in 2008.

See rest of article via link above.