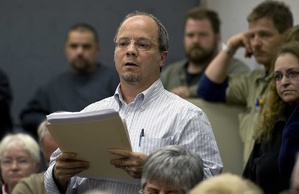 Tom Jiunta and the Gas Drilling Awareness Coalition have been working tirelessly to advance a petition in support of an ordinance which would protect the water supply of Lehman Township. Tonight they presented the ordinance which is similar to one recently passed by the the Licking Township (Pennsylvania) Board of Supervisors. The Lehman ordinance was  drafted by the Community Environmental Legal Defense Fund Defense Fund.

The proposal presented to the Lehman Township Board of Supervisors, would make it unlawful:

“for any corporation to import water into Lehman for use in the extraction of subsurface natural gas or to deposit waste water, “produced” water, “frack” water, brine or other materials, chemicals or by-products of natural gas extraction into the land, air or waters within Lehman Township.”

Here is the early online edition from the Times Leader: Lehman supers hold off vote on anti-drill law

This initiative is about citizen’s rights and the heart of a democratic society.  We share the air and the water.  Collectively, we have a constitutional right to clean air and water.   Any sane society would insure that.   No individual, or corporation has the authority to usurp these basic human rights.

Although advised otherwise, the Supervisors insisted on keeping the venue at the Lehman Township Building instead of larger venues in the immediate area.  Consequently some citizens left because they could hear nothing from the entrance hall.  That is, they were not allowed to participate in the process due to venue constriction.  It is an age old strategy of those who want to impede the democratic process rather than support it.  The Supervisors’ obstructionist behavior is not a surprise given the reality that two of them were found to be ethically compromised by  the state ethics commission.

(And thank you to the Community Environmental Legal Defense  Defense Fund for your statewide efforts to bring power back to the people.)

The supervisors refused to take action on the proposal, citing a fear of law suits and a lack of authority,the Gas Drilling Awareness Coalition and the CELDF will continue to put this issue forward. See the Citizen’s Voice coverage here: Lehman Twp. supervisors take no action on drilling ordinance

“DEP lies to residents of Waterville”

Here is a most recent update on the Pine Creek Toxin Spill from the Responsible Drilling Alliance:

AIRFOAM HD discharging into spring water from gas production — Dan Spadoni of the DEP said to the reporter in this news article that the MSDS sheet states that Airfoam HD is not dangerous — but it is, Air Foam HD has high levels of a chemical called 2-BE (2-Butoxyethanol) which is strongly associated with a rare form of adrenal cancer. The MSDS sheets for Airfoam HD indicate that this chemical product can cause health problems and is also soluble in water. Water tests for 2-BE are extremely expensive, costing over $100 for a 500ppm test of a water sample (as Wayne and Angel Smith in Clearville, PA found out last winter). There is already one poster child for 2-BE contamination and this rare adrenal cancer in a gas drilling area: Laura Amos.

Here is an update from Responsible Drilling Alliance:

This is what the Sun Gazette article did NOT say about Airfoam HD, the substance running down the hill in Waterville and into Pine Creek.

From Damascus Citizens for Sustainability:
2-Butoxylethanol (2-BE) is a foaming agent used for natural gas production and is proven to cause cancer in animals. 2-BE is a primary component of AirFoam HD, a product that has been found on drilling pads in Pennsylvania — the Material Safety Data Sheets (MSDS) for Air Foam HD state that is dissolves in water and that chronic exposure causes cancer. Testing for 2-BE costs over $100 per test, and the cost burden is on the landholder. DEP has failed to test for drilling or fracking chemicals in their standard tests, which are only performed when landowners report problems in their water supply, not before the problems occur. Residents who will soon have natural gas production occurring in their region or upstream from their groundwater supply must hire an independent water testing company to do a “baseline test” to show the lack of contaminants prior to the drilling. Without a baseline test, it is more difficult to convict a drilling operator for water contamination – the drilling operator can claim that there is no proof that the contaminant was not in the groundwater supply prior to the drilling.

From The Endocrine Disruption Exchange a nonprofit organization founded by Dr. Theo Colborn. TEDX is dedicated to compiling and disseminating scientific evidence on the health and environmental problems caused by low-dose exposure to chemicals known as endocrine disruptors, which interfere with development and function.

In order to prevent injury while working with potentially harmful products, Material Safety Data Sheets are designed to inform people who handle, ship, and use these products about their physical and chemical characteristics and their direct and/or immediate health effects. Many MSDSs do not address the outcome of long term, intermittent or chronic exposures, or adverse health effects that may not be expressed until years after the exposure. 2-Butoxylethanol (2-BE) is one of the nastier things the drilling industry uses, It is soluble in water, vaporizes in air, and is taken up through the skin. It can cause a very specific adrenal tumor linked to its exposure. 2-BE is implicated in a wide variety of health effects in most systems of the body and should be handled with great care. Studies have indicated there is no known level of dilution where 2-BE does not have an effect on organisms. Download the spreadsheet at: http://www.endocrinedisruption.com/chemicals.fracturing.php

This incident is of grave concern to us all, especially those who live in Waterville or had planned to catch and eat fish from Pine Creek.

A Must Hear Video – 9 minutes

Here is a direct testimony by an intelligent articulate man who has been betrayed by Big Gas. His name is Ron Gulla from Hickory, PA. He is speaking out. PLEASE LISTEN.

There are several other videos of Ron on You Tube. PS – a thank you to Susquehanna River Sentinel for finding thi 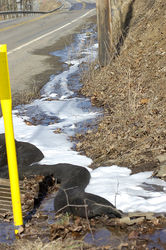 It is believed to be 2-Butoxylethanol (2-BE), a foaming agent used for natural gas production proven to cause cancer in animals. See How Should We Do the Mountain for more details.

When I slammed this blog together six weeks ago, I poured over website after website and tried to provide links for a quick education. There was much I never got to review.  My initial objective was to get the word out as soon as possible – to give a web presence to the work already started by people like Tom Jiunta and Audrey Simpson.

Recently I became aware of a dynamite set of sites: one a website and the other its matching blog.  They are UN-NATURAL GAS.org and UN-NATURAL GAS.org WEBLOG. They were created by CDOG – Chenango Delaware Otsego Gas Drilling Opposition Group. They cover national as well as regional drilling stories. Subjects such as cost externalization, community readiness, moratoria, and energy independence. Check out the Organizer’s Page and the comprehensive FAQ page on the website. Also the images section and the “Lies” section. This is the primer for which I have been looking. The site is a work in progress. It is creative, edgy, and informed. I plan to return to it often. Grab a beverage and check it out. Please.

There once was a lass from EnCana,
Offering riches beyond heaven’s manna,
She promised everyone more
But when we tallied the score,
All we gained was a dead Susquehanna.

I invite anyone/and everyone to submit a poem (or song, essay, rant) related to BIG GAS, the Marcellus play, the beauty of this area, its heritage….you get the idea.   I will start things off:

who will want their milk?

At my table
I sit and think,

Andrew worked with facts and extrapolated them to the scales of production which have been projected here.  He used slides to show fully developed fields, sites in preparation, and waste ponds being dozed back into the earth.  He spoke about the generators which spew out ozone creating hydrocarbons, pipelines, access roads, dragon tanks, diesel trucks, waste fluids, and radioactive mud.  He spoke to the typical everyday spillage, topsoil degradation, and its cumulative effect on the water system.  He spoke to mismanagement, the Cheney/Halliburton loophole, endocrine disruption, and the industrial sized scale of it all.  He also covered community organizing, monitoring strategies, and local political activism.   It was a rational and fact based portrayal of a world we are allowing to happen.

Here is the Citizen’s Voice coverage:

Here is the Times Leader coverage: