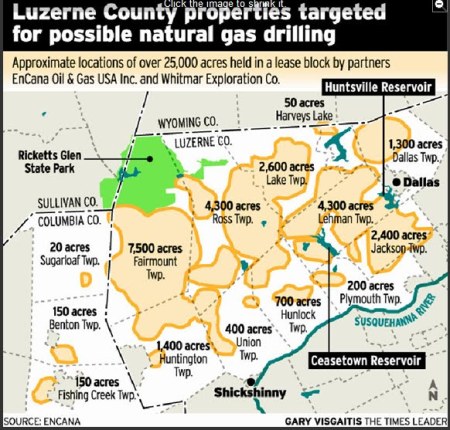 This map published in the Times Leader on Thursday, May 6, demonstrates how ubiquitous and widespread EnCana’s fracturing plans are.  At the County Zoning Board hearing on Tuesday night, I asked the EnCana representatives how many wells are planned  if the exploratory ones are productive.    Wendy Wiedenbeck  of EnCana said they have no idea because all this activity is strictly “exploratory” and that is their sole plan at this point.  She would not discuss any possible numbers.

So, let me get this straight, they commit to leasing over 25,000 acres without a vague notion of  possible scenarios?  They commit at least $25 million without any production projections? I don’t believe it.  Looks to me like hundreds of wells.  Looks to me like a major industrial footprint. Looks to me like a at least a billion gallons of toxic water left underground to slowly traverse the fractured shale,  seeking a point of inexorable egress.

See Front-page news: Marcellus Shale vs Farmville at Another Monkey.  It portrays the difference between a newspaper which puts reporting first versus one which transparently plays to advertisng, the public be damned.